Recently someone I had only met a couple of times commented that I seem to read a lot of books.

Their comment was in response to me quoting something from an author–I think it was Nassim Taleb I was quoting.

My response was that no, I actually read very few books. That I read slowly and I read books multiple times. So it’s not that I read a lot of books, but that the ones that I do read I have a lot more of their content and ideas consumed and accessible.

The idea for me is that if an idea matters enough, I don’t want to just have it relegated to a hard-to-track-down memory of having read it. I want it to be accessible by as many neural pathways as possible.

Here’s how that process looks:

The first time I usually listen to a book as an audiobook while doing other things–cleaning, driving, walking the dog. That’s the first pass to see if it’s worth actually incorporating their ideas further into my life and character. If I’m impressed by that then I buy a hardcover copy of their book and go through it slowly, highlighting and taking notes in the margins. Sometimes books are so impactful during the first listen I will buy the hardcopy right away so I can jot down all the things I think about while listening–this happened most recently with The Laws of Human Nature by Robert Greene.

For the absolute best books I will go through them a third time and write reviews and articles where I capture ideas from them that I want to keep forever.

This section of the site is for that third class of books that I want to write about so that their ideas are deeply lodged in my mind. 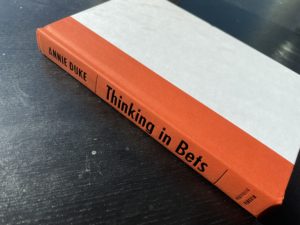 Thinking in Bets, by Annie Duke One sentence summary of this book All decisions are bets with something on the line, thinking of them as 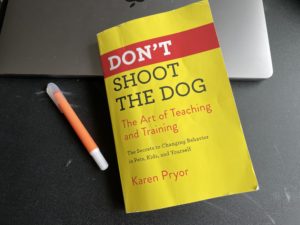 Don’t Shoot the Dog: The Art of Teaching and Training

Full Title: Don’t Shoot the Dog: The Art of Teaching and Training, The Secrets to Changing Behavior in Pets, Kids, and Yourself. Author: Karen Pryor