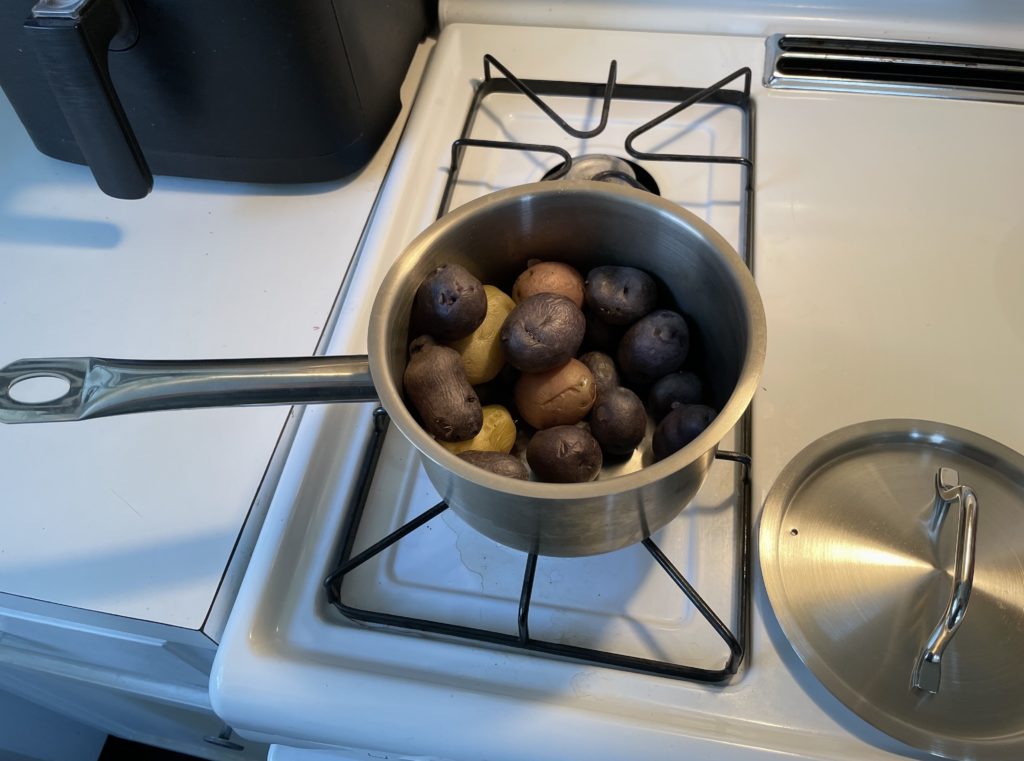 In a study dating all the way back to 1995, called “A Satiety Index of Common Foods,” dozens of different foods were compared to see what foods were the most satiating–that is, what caused people to feel the most full and not feel hungry the longest. As you might have guessed from the title of this post, boiled potatoes won by a long shot.

For me, dieting has never been about “just cut out soda” or “eat less cookies”. That kind of advice has always felt horribly condescending because, guess what, I don’t drink soda or eat cookies. Sure, there are occasional variations or times where I fall off of my strict dieting habits, but for most of my adult life, my diet has been so strict friends have compared me to a monk. And even with that level of intensity I’ve always been about 20 to 30 pounds above where I would like to be. I’ve done long stretches of keto, even successfully accomplishing plant-based keto for a while. I’ve done intermittent fasting. Hell, I’ve gone through long stretches where all I eat are salads.

What’s the problem? Well, for me it’s hunger. Yeah, hunger. I feel hungry most of the time. I suspect that in the not-to-distant future as we deepen our understanding of the gut microbiome we’ll find out that–perhaps because of an individual’s bacterial makeup–some people really do experience more hunger than others.

Behavioral science would in some ways support this. Any action that is performed habitually has some sort of a trigger. You get in your car, you buckle your seatbelt. One action, feeling, or experience triggers a particular action. You go into a bar, suddenly you want a drink. We are all Pavlov’s dog. Hunger is the trigger to wanting to eat. Trying to change our overall health by willing ourselves to ignore the trigger is going to be exhausting and unsustainable. If we want to eat less food, we need to feel less hunger.

I know, It seems like an absurdly simple solution to people being overweight. But maybe that’s why we are overlooking it: we need to make people feel less hungry.

To my mind, this may be the main reason that keto works so well for some people. Eating a high fat diet naturally results in increased satiety and less hunger.

Hence, for me, the potato diet. At the start of the day I boil a pot full of (mostly purple) potatoes. Then throughout the day if I experience hunger–the thing that would send me into the kitchen looking for a snack–there’s a bit pot of potatoes all cooked up and ready to eat. I can pick one up and munch on it with little effort and it actually cures the problem that sent me into the kitchen, namely feeling hungry.

I’m not the only one to experiment with this:

One Redditor reported their (admittedly anecdotal) experience of losing more weight when eating just potatoes than when fasting. They were posting to Reddit out of pure confusion hoping someone had an explanation. If you don’t mind slogging through Reddit comments, the discussion there is fascinating.

The famous magician Penn Jullette also reportedly lost over 100 lbs on a mostly potato diet. Although he qualifies any discussion of it by saying that anyone taking nutrition advice from a Las Vegas Magician is an idiot, it does at the very least lend credence to the case for self experimentation using this method.

The plant-based nutrition guru Michael Greger M.D. has also done a video where he talks about aiming for satiating foods like potatoes when trying to lose weight or maintain general health. Here’s the video in full.

Admittedly, I’ve just started this experiment so my opinion may change as I progress through it. I’ll update this post as that happens.